July 15th 2017. Today began great. We were motoring through Oklahoma enjoying the scenery and the dirt roads.

Then the wheels came off. We had to cross what looked like a simple washed out road. What we didn’t do was actually walk down into the ravine and verify the consistency of the mud. It was soft and deep -really deep. I went first and immediately buried my front wheel. After much manual labor tugging out the bike we were physically smoked. 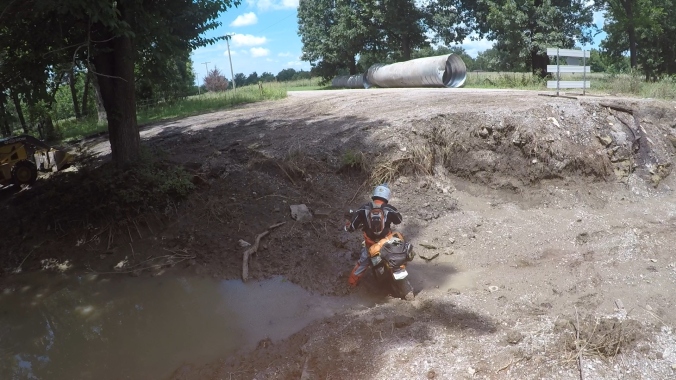 Then it was Chris’ turn. He took a better line but the mud sucked his rear tire in. We pulled and cajoled it out of the ravine but sure enough he had smoked his clutch. 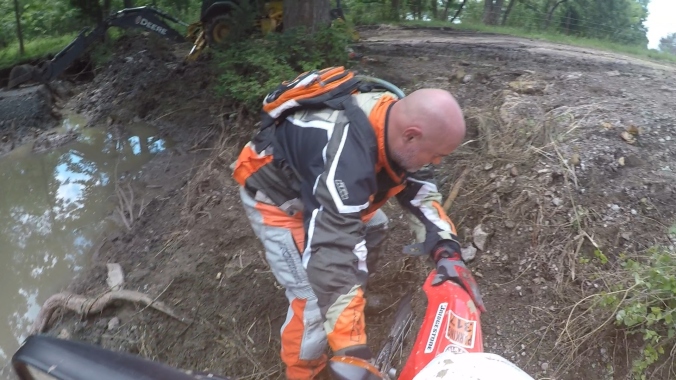 We were stuck. The maps showed us about five miles from Nowata OK (pop 3726, and I was sure that Nowata was Indian for no water…it was well over 105 degrees in Oklahoma). I towed Chris for about a mile until we arrived at a hardball road.

The temp was over 105 degrees and we had to resort to calling for help.

We were towed to the town of Bartlesville OK and had the driver drop us off at an Econo lodge. Chris Pulled out his clutch plates and it was done.

We had to come up with a plan as there was no way to get a new clutch anytime soon. We decided to rent a Uhaul and have Chris skip ahead to the maintenance stop in Gunnison CO.

Update: After Chris received the new clutch friction plates and compared them to the old ones it was apparent that the friction plates really weren’t worn but more “slick”. We determined that he had used an inferior oil and it simply got too hot and coated the friction plates rendering them useless. Hindsight being 20/20 we could of used some emory cloth and cleaned them and we guess that would have worked just fine. A $1000 mistake.

Tomorrow we truck it to Boise City OK.