July 31 2017. Today started with a fever to get done. We were only 300ish miles from the finish. Yes it wasn’t a race but after 21 days on the trail the end was welcomed. The trails led us through some great forests and high altitudes. 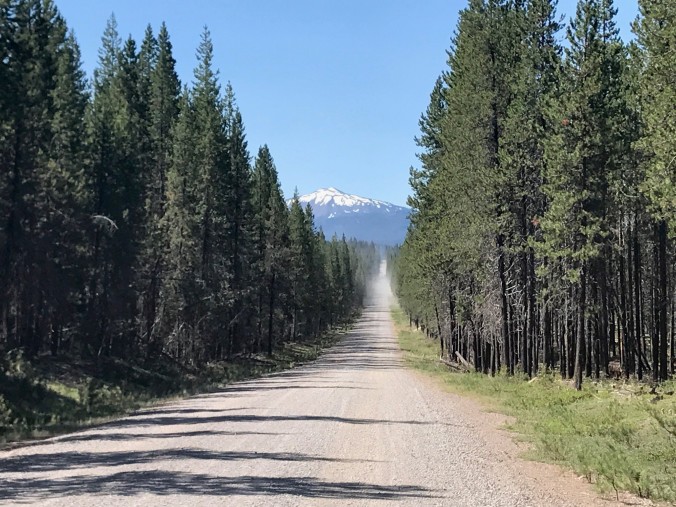 Many of the areas we went through had burned previously but the forest was recovering nicely.

Our destination for the day was Wolf Creek Oregon. We were several miles out and we faced a extremely challenging, steep, single track rock climb. All the bikes performed well as we powered straight up the mountain.

As we descended JB noticed a loud squeak coming from the rear of his bike. He thought he might just have a small rock stuck in the brake rotor or something. He had Chris take quick look as we were riding and didn’t notice anything.

It wasn’t until we had traveled another 15 miles and pulled into Wolf Creek when the realization of what the squeak was hit us.

Yes that is a missing axle block and nut. It must have vibrated off during the rock climb. The scary part was that just prior to arriving in Wolf Creek we had a 8 mile stretch of interstate at 65 miles per hour.

The lesson here is if you hear something different on your bike. Stop and check it out thoroughly.

Now that we were in Wolf Creek we were to bed down. The historic Inn was literally across the street from our fuel stop.

We still had a couple of hours of daylight left so we did some field expedient maintenance and contemplated several fixes for the axle nut.

Jb felt defeated. So close and couldn’t think his way out of this one.

Steve and Chris still had energy and brain power. Both motivated JB to press on. Several scenarios of how to fix it were flowing. We first started to ask around with the locals.

Unlike Steve’s issue in Huntington Oregon where we received tremendous support form the locals, Wolf Creek was a different story. Apparently the town had fallen victim to meth. On the ride in through the mountains we noticed several places hidden in the woods that were obviously meth factories. At the fuel stop and general store the meth heads were hanging out in front. From the hotel we literally watched drug deals go down. Shirtless homeless men with no teeth wandering around make everyone nervous, especially tourists.

Note to Wolf Creek Leadership: Get your shit together. A place with such natural beauty should not be overshadowed by the scourge of drugs. Fix it.

Tomorrow we solve the axle issue and finish the TAT.