July 20 2017. Today was our first day riding with Steve and we were headed for the Colorado Mountains. Once we cleared them we were headed into Utah. 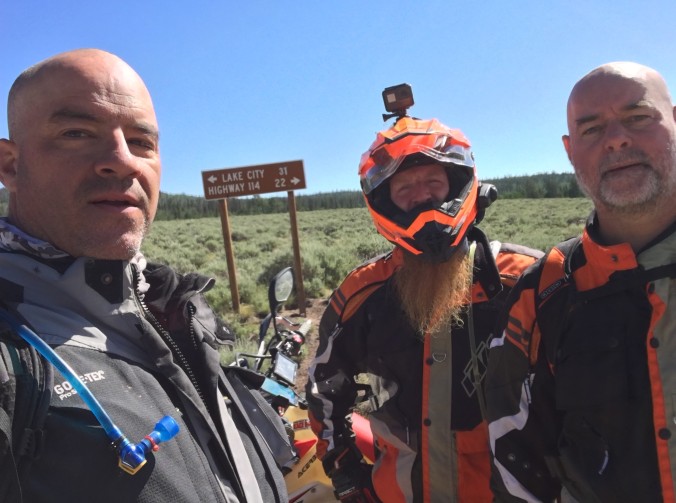 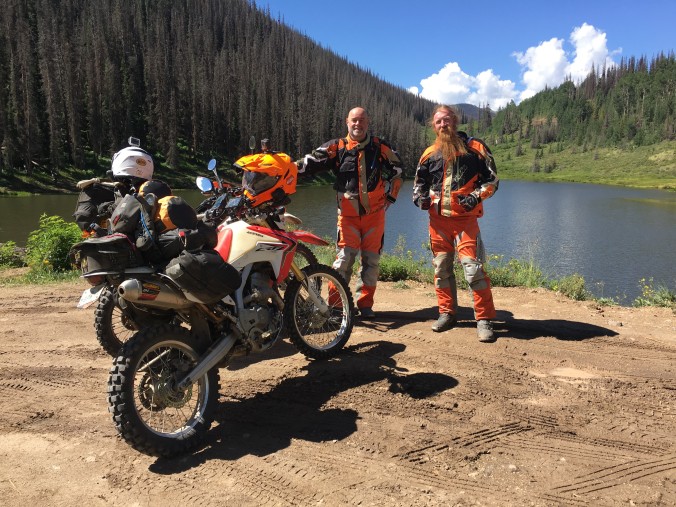 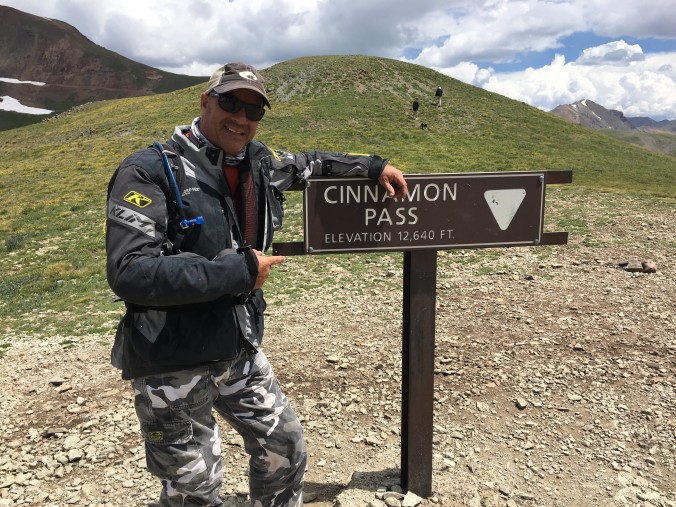 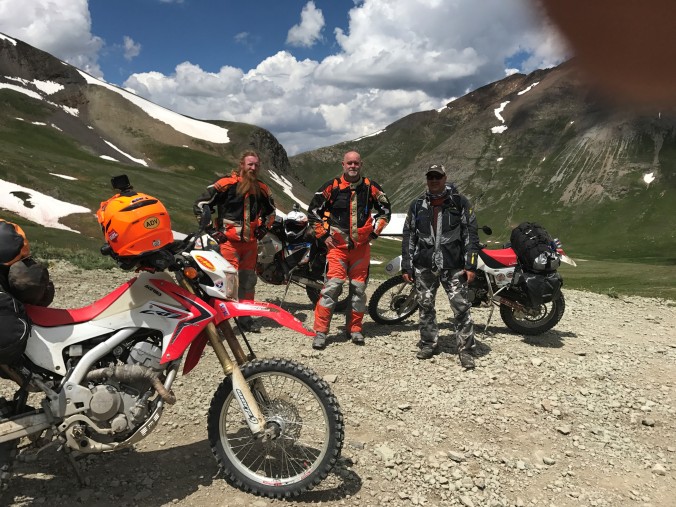 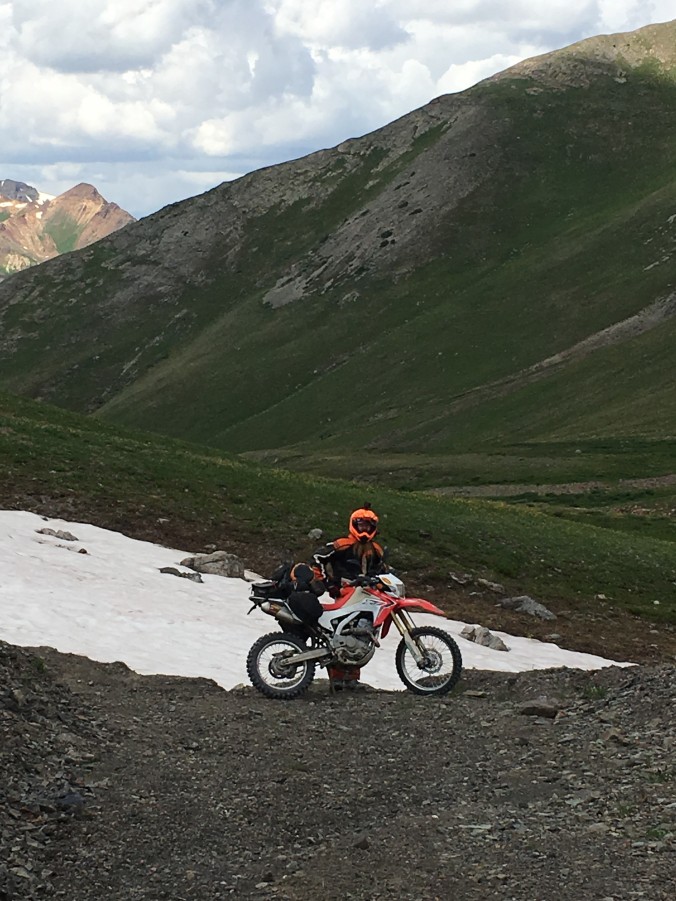 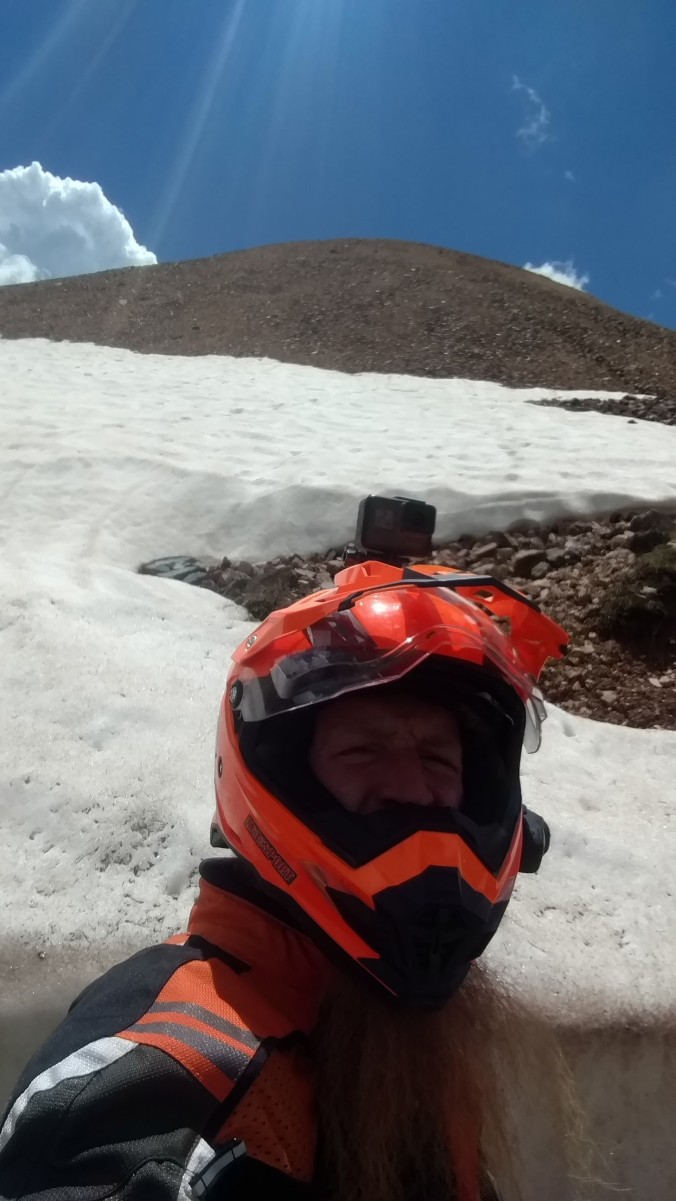 This happened coming down from Cinnamon Pass…Chris and I both boiled our brakes and therefor had no rear brakes coming down. 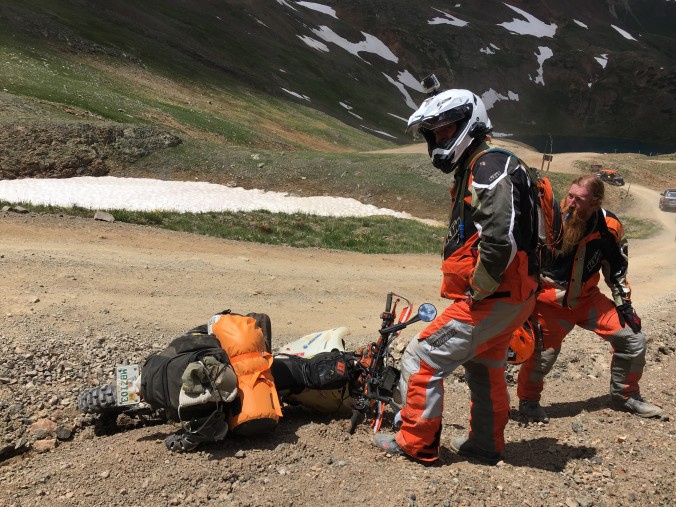 Taking a break after making our way all the way down. 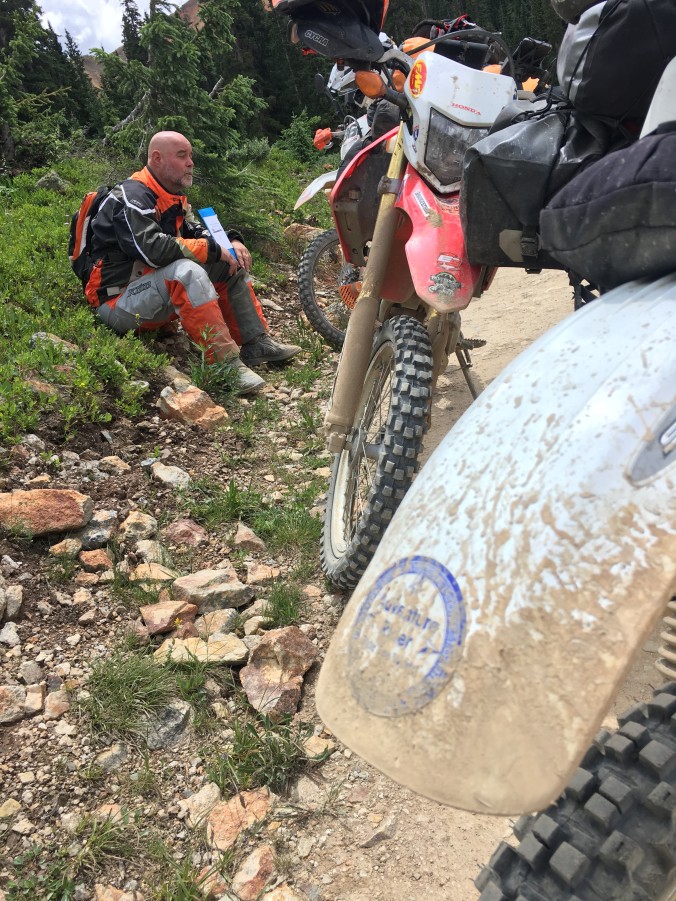 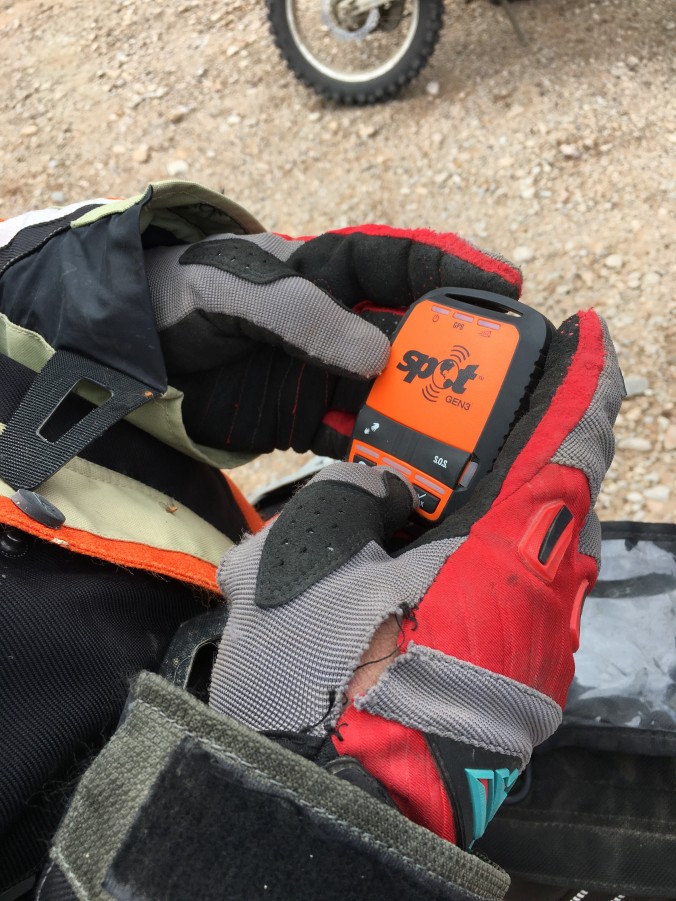 These bubbas stopped to chat while we were waiting for our brakes to cool off. We learned later that night that the guy on the right is the inventor of Monkey Butt anti friction powder. (similar to Gold Bond but better). 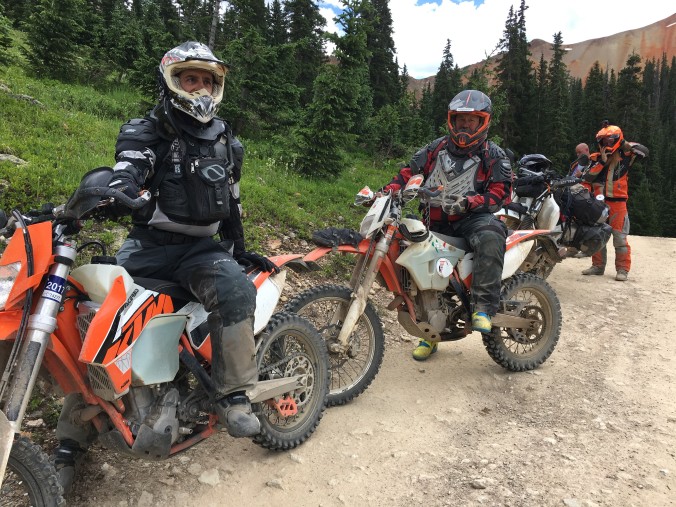 After the mountains we headed southwest into Utah. The weather was turning on us quickly as we headed west. You could see the lightning and storms rolling across the plains. 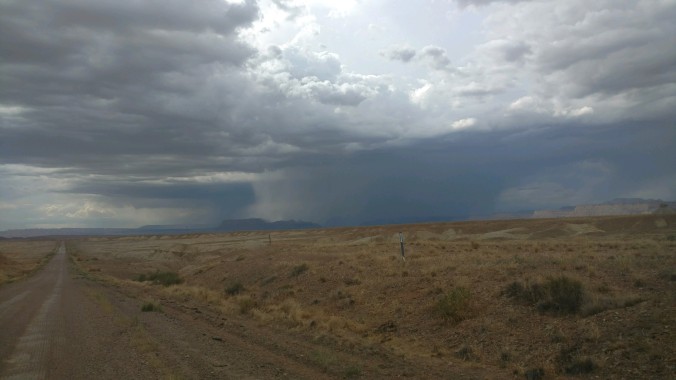 Our goal was to get to the 3 Step Hideaway. An off the grid 80 acre ranch that caters to weary motorcycle riders. The proprietors are Julie and Scott. Scott was off riding through WY thus Julie was there to greet us. 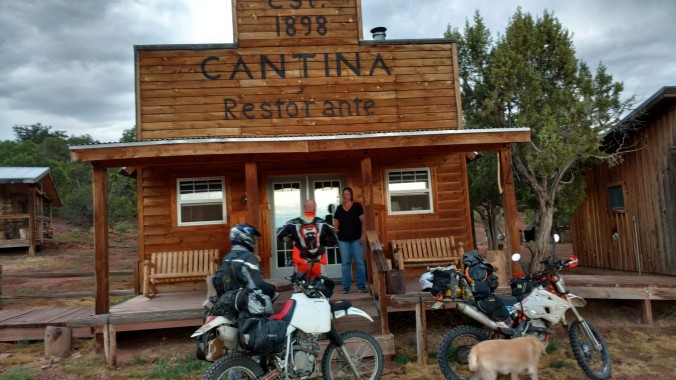 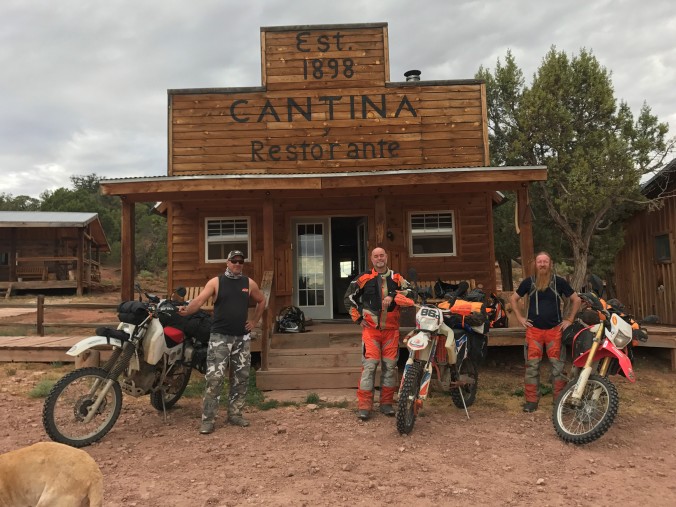 The hideaway offers tee-pees and cabins for rent. They have a bathhouse with running water. Everything is powered via solar and batteries. 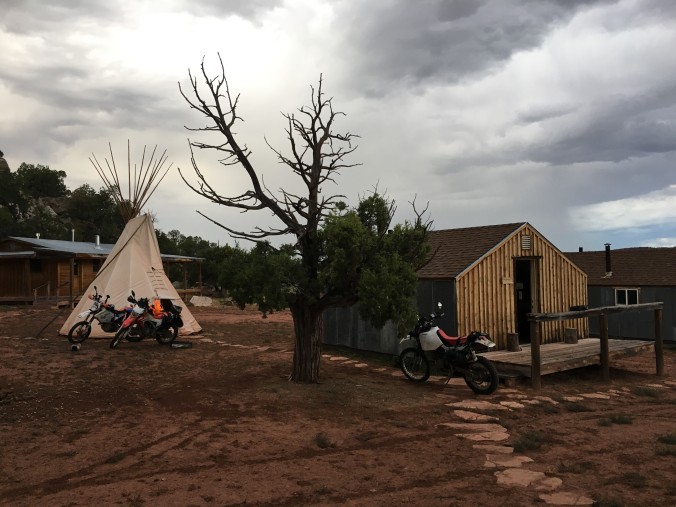 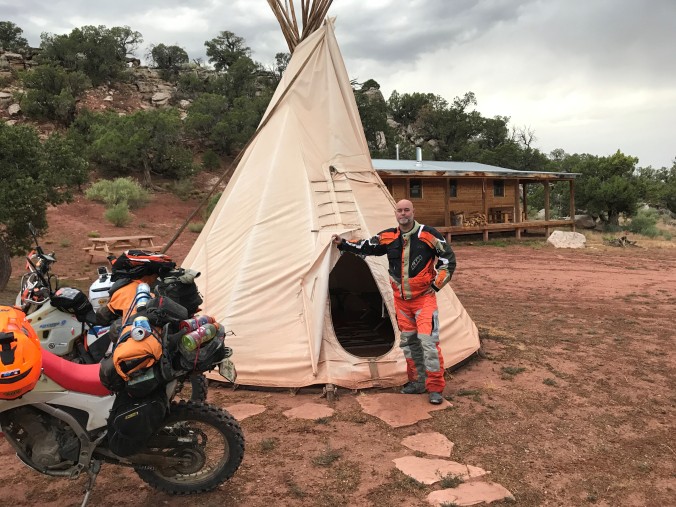 Chris and I shacked up in a tee-pee and Steve chose a cabin. 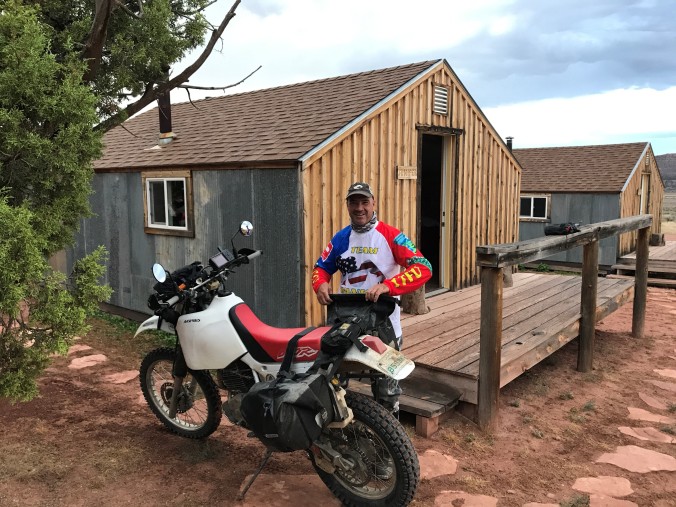 We spent the majority of the night kicked back on the porch drinking beers and enjoying the sundown. Tomorrow we head to Moab.

Jb has asked me (Steve the 3rd wheel) to chime in on the blog now that I have joined in on the ride.  I can’t express enough how grateful I am to be allowed to join in on this adventure.  I feel very lucky to have met JB in January at an advanced riding class in Florida. At the end of each day of the class JB and I would talk about bikes, riding, goals etc and we found we had a lot in common.  When he mentioned he was outfitting his KTM 350 for the TAT in the coming Summer I immediately started sharing stories and started reliving my own TAT adventure…….By the second day I realized that this may be the perfect time and group to finish the TAT with.   I realized after talking to Jb a few times that these guys are as prepared as you can be and are serious about finishing this journey end to end no matter what.  Its definitely important to do long adv travel with riders with near the same skills and goals.

In 2009 I did the TAT from Memphis to Moab with two friends from Key West.  We were on big bikes (800 /1200cc) and since finishing that trip I have longed to finish the Tat from Moab to Port Orford…. And for sure on a smaller lighter bike.

Well here we are on day 1 (for me).  A long day of adventure for sure and we were all very glad to finally make it to the 3 Steps Ranch.  I can’t imagine a cooler place for Tat riders to hang at the end of a day.    The only reason we made it from Gunnison to 3 Steps (260 miles) is we had to cut out a portion of the TAT and opt for road.  The change in plans was made when we by chance met Andy and John on the trail post Animas Forks when they pulled over to see if we were ok.   Andy and John are locals ( mentioned above) and know the terrain between where we were and the 3 Steps Ranch.  Like many other things in life,  LOCAL knowledge trumps any other form of information.  Gps, maps, blogs …are all information … Local knowledge is Wisdom and finding it is like finding gold.  In fact on an adventure trip like this… it should be sought out and used as often as possible.  When we told Andy and John our plans ..they looked at each other and sorta said … ” You are going to 3 Steps TODAY ?  Via OFFROAD ???  A little while later while gassing up in Ouray their message was clear… we knew we had something to seriously consider.  We decided it was important to make it to 3 Steps at the end of the day and there was little chance of us making it before dark using the TAT.  So for safety reasons we decided to SLAB it to Monticello then do the last 30 miles offroad. We were right because In the end screaming along at 60+ we barely made it b4 dark.  Anyone who does the Tat should realize that riding at dusk offroad with normal dirtbike lighting is extremely dangerous.  Animals frequently dart out, you are tired and sighting ruts, washouts, ditches and rocks gets sketchy. 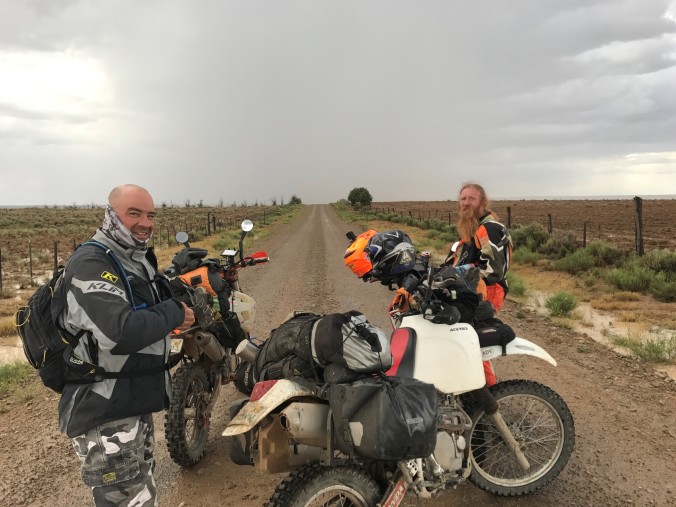 Here we were …..almost at the end of the very long day, stopped to let the active lightning storm between us and the ranch move along at its own pace.